How to fold a quillow

Following instructions in how to fold a quillow can seem a little complicated.

As the quillow looks like a cushion and when it is taken out it looks nice as a quilt. Often the worry is that it will not go back into place.

There is no hard and fast rule about folding a quillow to put it back into the cushion case. One way will be really easy for some but a totally different way will be better for others.

Here I will try to describe some of the ways to achieve this.

A way to fold the quillow back into the cushion case.

For me this is the easiest way. After you have had the luxury of some extra warmth from your quillow and now it is time to fold it away.

Lay the quillow pocket side down on the floor, table or your knee.

Fold one side (along the line that was stitched to hold the wadding in place) of the quillow towards the centre.

Fold the other side (again along the stitch line) into the centre to overlap the first side a little.

Beginning from the end of the quillow away from the pocket, fold the quilt three times so the third fold ends up with the quilt on top of the pocket.

Turn the cushion over so the pocket is on top. 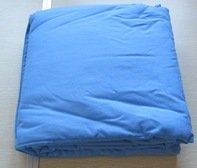 Put your hand into the pocket and take one of the corners of the quillow and turn right side out. Repeat with the other corner. 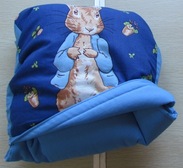 This is where a little adjustment comes into play to get the quilt lying flat in the cushion.

I know some people don't bother with the last step and leave the cushion looking a little uneven or lop sided but I think it shows the quillow off to have the quilt inside neat and tidy.

Once you have the basic idea of folding the sides of the quilt into the middle and then folding it to get it back into the cushion cover. You can have your own method.

I have seen some people fold the quilt part in half and then in half again and it all seems to go into place without much bother.

However you manage to fold a quillow back together I hope you enjoy using them as I have.

Return from fold a quillow back to quillows.